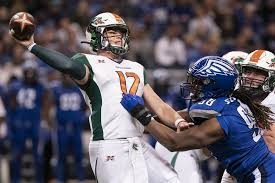 The Seattle Dragons dropped their second consecutive game with a turnover late in the fourth quarter to lose to the St.Louis Battlehawks 23-16.

After a horrible first half where the Dragons could not get any productive drives going and only countered on a field goal, the coaching staff decided to bench Brandon Silvers and insert B.J. Daniels in the line-up. Daniels sparked a couple of drives that turned into touchdowns and was on the brink of tying the game up late in the fourth quarter, but threw a crucial pick that ended the game, 23-16.

The Dragons are trying to figure out their quarterback situation. Silvers has been the main guy for the majority of the season, but he has not had a quality game since the first week of the XFL. Silvers has completed 53 balls out of 103 attempts, 6 touchdowns, and 4 interceptions, but he lacks vision down the field. In consecutive games, he has missed open receivers down the field.

Daniels has a lot more oomph with his teammates. He brings in a lot of energy and has shown that he can throw the deep ball. It will be interesting to see if Daniels will start next week.

Right now the Dragons need to dig themselves out of this 1-3 hole and find some type of spark to get them into the playoff discussion. Next week they will face the Houston Roughnecks and hope they can produce enough offense to get the win.