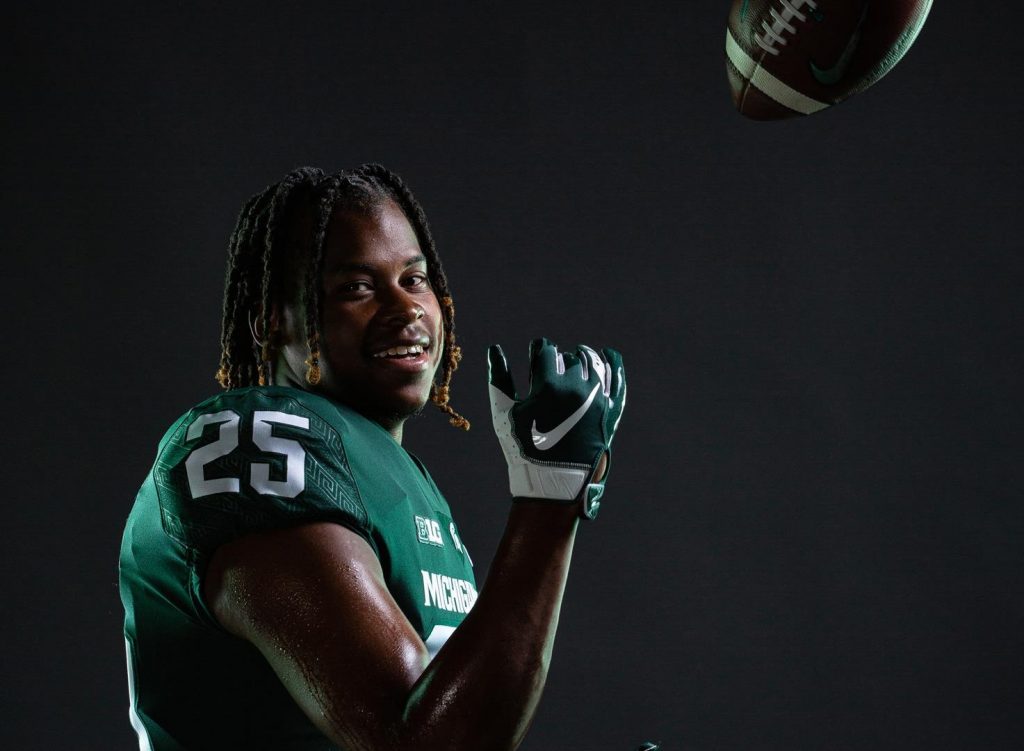 The book of Job is a familiar biblical story. Job is widely known for facing unimaginable adversity and coming through on the other side with bigger and better than what he had before. For Michigan State University (MSU) wide receiver and NFL Draft prospect Darrell Stewart Jr., he knows this story very well because his father would use Job’s journey to instill life lessons that he still holds on to.

“My dad was a very biblical man,” Stewart said. “He used to always tell me stories about the book of Job in the Bible and how times might get tough. Adversity is going to hit but it’s actually testing your faith. It’s how you respond to adversity that really shows your character and your courage. He used to always tell me that pressure either makes diamonds or it’s going to break you.”

As Stewart looks forward to the NFL Draft this week, those words could not be more true. He is apart of a Draft class that will never be forgotten amid the COVID-19 pandemic that has halted sports around the world. As stay-at-home orders and social distancing mandates began sweeping the nation in March, it became clear that the NFL Draft and all activities leading up to it were in jeopardy. Despite the changes and cancellation of in-person activities (i.e., Pro Day), Stewart is keeping his eye on the prize.

“My preparation has changed a bit. Going to the Combine but not being able to go to Pro Day, that was kind of different,” Stewart said. “Then also talking to teams virtually and getting to know coaches virtually. For the coaches, it’s kind of tough for them to actually get to know somebody they’re not personally with physically. The draft process during this whole thing is a little confusing, like not going to different workouts, but I’m definitely going to put my best foot forward. It’s actually been a blessing. I know a lot of people are not able to be here and experience these things so I’m really just living my dreams through them as well.”

Stewart’s ability to see the positive in situations ties back to his father’s advice but that outlook didn’t always come easy. At the young age of 12, he lost his father in a tragic car accident. For anyone, losing a parent is one of the biggest tests of faith life can offer. That was no different for Stewart who was at a point in his childhood where he needed his dad the most.

“My dad was one of my biggest motivators,” Stewart explained. “He was my coach. He was my best friend. So that whole situation was very tough. Losing him at that age, 12 going to 13, you’re trying to find yourself as a young man.”

“My dad was a great guy and everybody loved him in Houston,” he continued. “He was very well known. It was pretty tough shoes to fill but I feel like he left a wonderful foundation for me to pick up on. That’s my biggest motivation, just to know that he’s always watching. That’s the biggest push for myself.”

While it did take time to overcome the loss, Stewart also had to remember that one thing his dad always wanted was for him to play football. At MSU, he left his mark on-and-off the field. As a four-year letter winner and three-year starter, Stewart finished his career with 150 receptions for 1,640 yard and seven touchdowns in 43 games, including 21 starts. He was also ranked among MSU’s all-time leaders in receptions (third with 150), receptions per game (ninth with 3.49) and receiving yards (tied for 23rd with 1,640 yards).

Considering that he missed the final four games of his senior year after breaking his leg in a regular season game against Penn State, Stewart managed to rehab his way back within two months to play in the team’s bowl game, finish his college career as an all-time leader in several categories, and attend the NFL Combine.

“When the injury first happened, it bothered me because that was my senior year,” Stewart shared. “But the main thing was just talking to my mom everyday. She told me not to let that hold me down. She was big on God probably did this so you can focus more on school. I didn’t want to hear that at the time but when she really broke it down to me, I was able to put my energy to other things like helping my teammates and the younger guys learn more.”

Despite focusing more on school and his teammates, rehabbing was still an uphill battle. However, pressure makes diamonds so he was up for the challenge. He spent countless hours in physical therapy, working out, and living a healthy lifestyle in order to work his way back to full strength.

“I want to thank my trainers and doctors who helped me out as well, he said. “They pushed me on the days I felt like it [physical therapy] wasn’t working but it was actually working. That whole process was crazy. But it was worth it. It humbled me.”

Based on Stewart’s journey, it is apparent that he is resilient but there’s more to him than meets the eye. He considers himself an old soul with an infectious personality, which is validated by his claim of the MSU team humorist award three years in a row and when he shares his favorite artists are Otis Redding and Daniel Caesar. Furthermore, it’s only fitting that his favorite comedians are Richard Pryor and Martin Lawrence.

As general managers of the 32 NFL teams prepare to make Draft day decisions, Stewart offers teams a big playmaker and relentless blocker who is also a positive influence in the locker room and the community. So far, he has talked to several organizations including the Baltimore Ravens, New York Jets, Buffalo Bills, Cleveland Browns, and his hometown squad the Houston Texans.

This week is the moment that he has worked so hard for. It’s the reason he is able to look at the adversity he has faced as lessons that will help him thrive in the NFL. One of those key lessons learned is patience. That will be exactly what he needs as he waits for that life-changing phone call. And when it happens, the first person he will embrace is his mom.

“I’ll just tell her thank you and I love you,” Stewart said. “Her hard work for me is not going to go unnoticed. I’m going to definitely make sure I always put the best foot forward. I’m just going to give her a hug and let her know this is only the beginning.”

As Stewart embarks on this new chapter, he knows his father will still be watching.