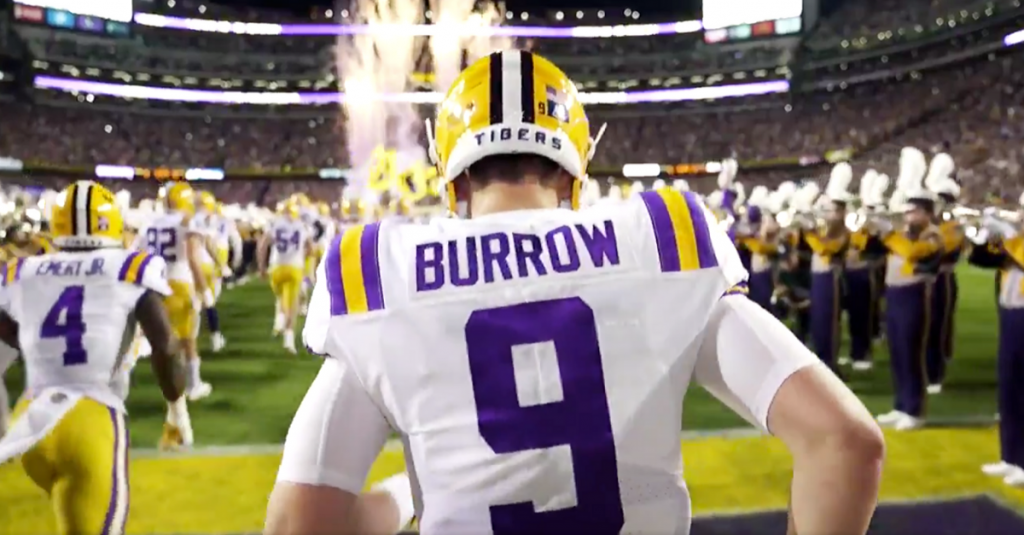 The 2020 NFL Combine has officially kicked off and by the end of the weekend, we will know who runs like the wind and whose hands are too small to hold a Whopper. While the experts are busy making stories out of non-stories, Pro Player Insiders presents their first mock draft of the year discussing who we think teams are likely to take, while also discussing who teams should actually take. Enjoy.

The Bengals Pick: With the first pick of the 2020 NFL Draft, the Cincinnati Bengals select Joe Burrow, quarterback LSU. If there was ever a no-brainer at number one, this would be it. The Bengals have all but said that they are done with Andy Dalton, and last year’s fifth-round pick Ryan Finley didn’t exactly set the world on fire. So here the Bengals are given a chance to take an Ohio native, one that statically had the greatest college quarterbacking season ever, to be the face of the franchise. Not even the Bengals can bungle this one, at least we hope not.

The Redskins Pick: With the second pick in the 2020 NFL Draft, the Washington Redskins select Chase Young, defensive end, Ohio State. Young is so good the Bengals should consider him over Burrow. The Redskins will not pass and they will not trade. Young broke the Ohio State sack record (16.5), after serving a two-game suspension and is a talent that can single-handedly make a defensive unite elite.

PPI’s Pick: Chase Young no matter what. This should be the easiest decision made by any team in the 2020 NFL Draft.

THE Pick: With the third pick of the 2020 NFL Draft, the Detroit Lions select, Jeff Okudah, defensive back, Ohio State. The Lions get the best lockdown corner in the draft to neutralize Devante Adams, Stefon Diggs/Adam Thielen and Allen Robinson for years to come. Pair him alongside pro-bowler Darius Slay and the defense is even more formidable, or they have Slay’s eventual replacement in the event they don’t re-up him.

The “SHOULD” Pick: We think the Lions front office rolls with Okudah, but the pick should be Tua Tagovailoa, quarterback, Alabama. Matthew Stafford has injury concerns, and Tua has some of his own. The Lions should trade the expensive veteran quarterback in favor of the Alabama product who has continually excelled with a plethora of talented receivers at his disposal, plus he also offers some much-needed mobility behind a patchwork offensive line.

THE Pick: With the fourth pick of the 2020 NFL Draft, the New York Giants select Jedrick Wills, Offensive Tackle, Alabama. The Giants are in desperate need of bolstering their offensive line. While the Giants have tried this in the past, it really hasn’t worked out for them. They should get their pick of any of the offensive lineman they desire. There are about five tackles who could be selected here, but we think they will go with the Alabama product.

PPI’s Pick: Also Wills. We think he’s the best of the options.

The Dolphins Pick: With the fifth pick of the 2020 NFL Draft, the Miami Dolphins select Tua Tagovailoa, quarterback, Alabama. Tua will be forced to subject himself to hours upon hours of medical testing by NFL teams, but things appear to be trending up for the Crimson quarterback. Tua intends on having his own Pro Day in early April and quarterbacks with ceilings as high as Tua’s just don’t get passed on.

PPI’s Pick: Jerry Jeudy, wide receiver, Alabama. We have no qualms with Tua being selected fifth overall (or earlier), we just have an issue with it being the Dolphins who select him. At first, it was clear the Dolphins were tanking for Tua. Then it wasn’t so clear. In 2018 Miami traded receiver, Jarvis Landry, to the Browns. In 2019 they shipped their starting left tackle, Laremy Tunsil, and receiver, Kenny Stills, to the Texans. How are these moves setting any quarterback up for success, let alone a rookie quarterback? You gave up a second-round pick for Josh Rosen, now give him so weapons.

The Chargers Pick: With the sixth pick of the 2020 NFL Draft, the Los Angeles Chargers select Justin Herbert, QB, Oregon. The Chargers take the next best available quarterback in the draft to replace Philip Rivers. Herbert falls into a dream scenario with Pro Bowl receivers and running backs at his disposal and inherits a playoff team that majorly underachieved this past season in part to injuries. Herbert’s arm and accuracy is ideal for this up-tempo offense that has an affinity for throwing deep.

The Panthers Pick: With the seventh pick of the 2020 NFL Draft, the Carolina Panthers select Derrick Brown, defensive tackle, Auburn. Mark this pick down as one where the team runs to turn the card the second Brown is available. Derrick Brown is probably the best overall player in this draft, and the fact the Panthers get him here at seven is a luxury. He’ll fit exactly what new head coach Matt Rhule wants to do on defense.

PPI’s Pick: Ditto! There may be some thought here to picking a quarterback, but we just can’t see the Panthers passing on Brown.

The Cardinals Pick: With the eighth pick of the 2020 NFL Draft, the Arizona Cardinals select, CeeDee Lamb, wide receiver, Oklahoma. The pick is just too sexy for us to think head coach Kliff Kingsbury will pass on the First-Team All-American. Lamb fits Kingsbury’s style and let’s not forget, he was teammates with Cardinals quarterback, Kyler Murray, at Oklahoma.

PPI’s Pick: Andrew Thomas, offensive tackle, Georgia. Don’t get us wrong, we love Lamb here, we just happen to think Thomas is the smarter choice. The Cardinals finally found their franchise quarterback in Murray and while it’s important to provide him with weapons, it’s more important to protect him. Arizona re-signed offensive tackle D.J Humphries and he’s beginning to pay dividends as a “late bloomer”, but he’s got quite a way to go to be among the premiere protectors. You can never have too many good linemen!

The Jaguars Pick: With the ninth pick of the 2020 NFL Draft, the Jacksonville Jaguars select Isaiah Simmons, linebacker, Clemson. The Jaguars gave up the fifth-most rushing yards to opposing running backs this season after sustaining injuries to Myles Jack and Najee Goode. They look to plug this gaping hole with Simmons, the versatile linebacker from Clemson. Drawing comparisons to Derwin James, the ‘do-it-all’ Simmons will be utilized in a number of sets and will undoubtedly draw the opposition’s best player.

PPI’s Pick: Simmons is our choice too, but don’t be surprised if the Jaguars address the offensive line in an effort to keep Foles/Minshew upright and provide some room to work for the running game.

The Browns Pick: With the tenth pick of the 2020 NFL Draft, the Cleveland Browns select Andrew Thomas, offensive tackle, Georgia. We firmly see the Browns going with an offensive lineman with the tenth pick. Which one may be a mystery. As mentioned earlier, there are about five offensive linemen who could be considered the top one, depending on which team you talk to.

PPI’s Pick: The highest-ranked left tackle remaining on their draft board. Barring some unprecedented run of five offensive lineman in the first nine picks, the Browns have to pick an offensive tackle. This could also be an interesting spot for a trade if they feel they can get their guy a few spots lower, especially if one of the top quarterbacks is still on the board.