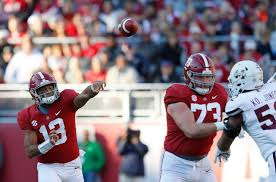 Former Alabama quarterback Tua Tagovailoa has stated that he is expecting to have his pro day in April. Tua is coming back from a hip injury that he suffered last season and a lot of critics are unsure of how it will impact not just his rookie year, but his career.

“Mentally it’s been a grind, but it’s not something that’s new to me. I’ve dealt with a hand injury, my left ankle, my right ankle. So I sort of knew what to expect going through this process, but it’s definitely been a grind,” Tua said.

After being drafted, there is speculation that Tua may sit for a year to get a better understanding of the concept. “I want to be able to play as a competitor, but a lot of the greats have been mentored by big-time quarterbacks, veteran quarterbacks,” Tagovailoa said. “If a team needs me to go out and start for them, I’ll do that, but if they need me to sit behind and learn from him, I can’t see what’s wrong with that.”

Tua excelled as a quarterback with Alabama and his football stats have proven that he can be a great quarterback for a professional team. Patience is a virtue and right now Tua needs to make sure that he is healthy enough for a pro day, shutting down the injury critics and allowing him to focus more on what he can offer a team.