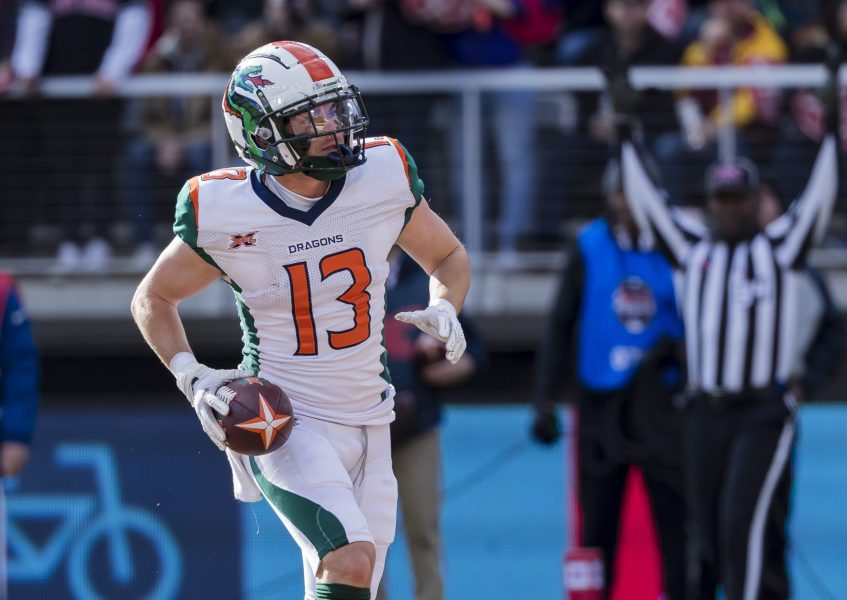 After a thrilling victory over the Tampa Bay Vipers last weekend, the Seattle Dragons looked to keep their momentum going against the Dallas Renegades on Saturday. In the first quarter, quarterback Brandon Silvers threaded the needle with a 20-yard touchdown pass to wide receiver Austin Proehl while under pressure. The Dragons would fail on the two-point conversion, leaving it 6-0 early in the first quarter.

Late in the first quarter, Dallas got on the board with a five-yard touchdown pass from Landry Jones to wide receiver Flynn Nagel. Dallas also failed on their two-point conversion attempt, leaving the game tied, 6-6.

Silvers had the Dragons driving for a potential score at the ten-minute mark of the second quarter but threw a pass into double coverage that would be intercepted. It was the first turnover for the Dragons, but the damage would be minimal as the Renegades would throw an interception of their own just a few moments later. Landry would attempt to find Nagel deep down the middle of the field, but the pass would be tipped and eventually hauled in by Dragons safety, Godwin Igwebuike, giving the ball back to Seattle.

With under two minutes left in the half, Silvers took his team down the field and threw his second touchdown pass to Kenneth Farrow, but Seattle would fail on another two-point conversion leaving the score, 12-6.

On the ensuing drive for Dallas, Jones would throw his second interception. With under a minute left in the half, the Dragons would be content going into the locker room with a 12-6 lead.

At the start of the second half, the Dragons decided to be the aggressor and gamble on fourth-and-short but failed on the attempt. Dallas took advantage of the great field position and started to get a productive drive going. Jones threaded the needle as he threw a 10-yard touchdown strike to tight end Donald Parham, but once again Dallas could not convert on the two-point conversion, leaving the game tied 12-12 with 3:34 minutes left in the third quarter.

After a quick three-and-out from the Dragons, special teams came up big for the Renegades on a 35-yard return that put the ball close to mid-field. After a couple runs by Dallas running back Cameron Artis-Payne, the Renegades were at the one-yard line of the Dragons, but failed to find the endzone and settled for a field goal, making it 15-12, Renegades.

Jones tacked on anther score as he threw a slant pass to Parham, who took it the distance for a 65-yard touchdown extending the lead, 21-12. The Dragons defense got a big break as the Renegades fumbled the ball at the 35-yard line, but could not capitalize off the turnover, failing on another fourth and short.

With two minutes left, Dallas bled out the clock with a couple of runs and Seattle suffered their second loss of the season.