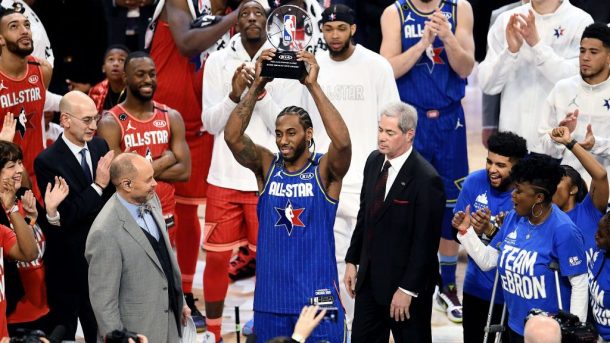 Chicago- Team LeBron wins in dramatic fashion over Team Giannis 157-155 to conclude the 2020 All-Star weekend. The NBA wanted to try something different with a new format to get the players to compete, so NBA Commissioner Adam Silver thought of adding a waiver to it. The waiver was what team won each of the quarters, a certain amount of money was going to go to a foundation of their choosing. Also a new rule change this time around, they would take away the gamecock and would play to a certain score. This year, in honor of Kobe Bryant, they added 24 points to the total score, which made it 157.

In the first half, both teams flew down the court and played little to no defense. Team LeBron got out to a hot start with Kawhi Leonard shooting a sizzling 5 for 6 from the three-point strike in the first quarter. Team LeBron won the first quarter and Team Giannis won the second quarter. However, in the third quarter, both teams started buckling down and started playing defense. Team Giannis was up by eight points with five minutes left in the third quarter, LeBron and his team turned it on. LeBron blocked a few shots, Leonard shot a couple more buckets and by the time fans looked back at the score, Team LeBron and Team Giannis were tied at the end of the third quarter and now the stakes were higher because whoever won the fourth quarter would win for their charities.

In the fourth quarter, things got a little heated and competitive, Kyle Lowry was taking charges and they were actually being called. Giannis chased down a LeBron James dunk and blocked it, which turned out to be a coaches’ challenge because one of the referees said that the block was goaltending, while the other said it was a block. After it was all said and done, the call was reversed. Back and forth the two teams went, big shot after big shot until Anthony Davis was fouled and all he needed to do was sink one shot in to win the game for Team LeBron. Davis missed the first shot, which built up a lot of anticipation and the crowd was nervously watching. Davis hit the next shot, which won the game for Team Lebron.

Here are some of the star’s comments about the new format.

GIANNIS ANTETOKOUNMPO: “After the game, my brother came down, and he said, this has been the most fun All-Star he’s been a part of. And I asked him why, and he told me, “Because you guys were really competitive. You guys were playing to win.” Team Giannis, that’s what we were trying to do. We were trying to come out, set the tone, play hard. Especially in the fourth quarter, the defense got tighter. Guys were hitting one another. Every possession counts. We had a little bit of playoff intensity out there. So I loved it. I hope we can keep the same format for a lot of years, and I think people had fun, we had fun. So that’s what it’s all about.”

JIMMY BUTLER: “It was dope. Damn sure got to compete at the end. It’s still fun to go out there and be known as one of the best players in the world in this league. Hopefully, it stays like that.”

JOEL EMBIID: “It was great. Fun weekend. Probably one of the best All-Star Games ever. Guys competed. It came down to basically the last shot. I don’t agree that you should be able to win on a free throw, but overall it was a lot of fun.”