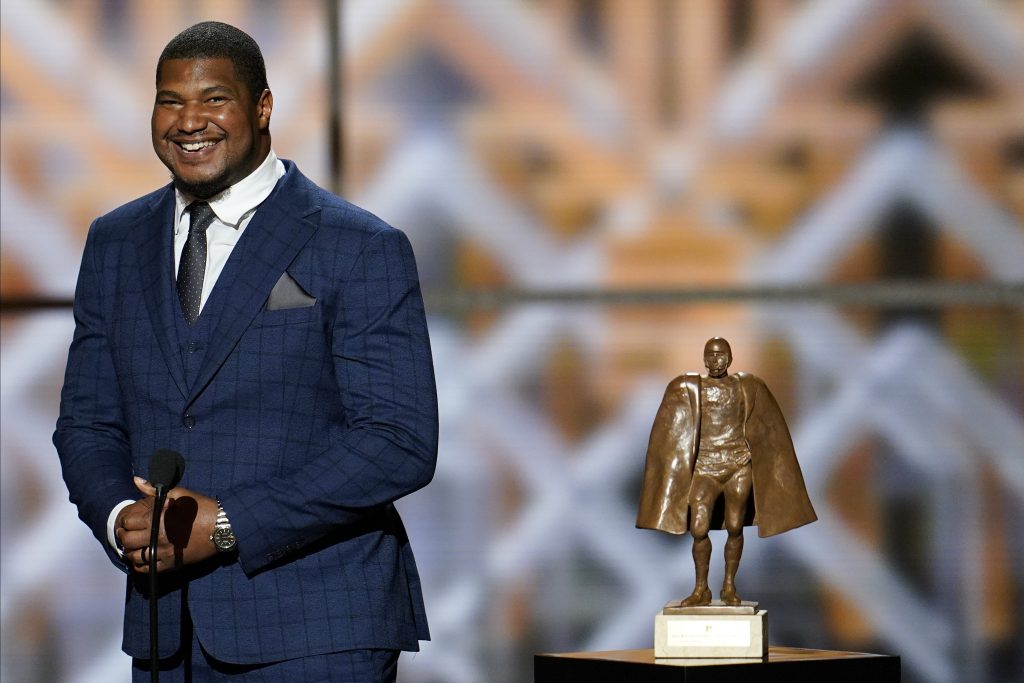 As a small-market team, the Jacksonville Jaguars are a franchise that tends to get forgotten in the midst of the other 31 NFL teams. That also means many of their players are not recognized at a national level for the work they do on and off the field. That all changed when Jaguars defensive end, Calais Campbell, was named the 2019 Walter Payton NFL Man of the Year Presented by Nationwide at the NFL Honors on Saturday night. He is the first Jacksonville Jaguar player to receive the honor.

“It means a lot. I always try to represent my organization the best way I can,” said Campbell. “I take a lot of pride in being a role model. Not only to the kids in the community but to my teammates. Being in the community, they have a lot of prideful fans. People who really enjoy the game of football. But it is a city that needs a lot of help. Every city does. There are a lot of kids in need. When I went there and started looking around into the community, I was super motivated to leave my mark and try to really make a difference.”

Considered the league’s most prestigious honor, the Walter Payton NFL Man of the Year Award recognizes an NFL player for outstanding community service activities off the field, as well as excellence on the field.

“This organization’s been around for 25 years (Jacksonville Jaguars) and its had a lot of great players play there and a lot of guys who have done great work before,” Campbell continued. “Sometimes you don’t always get appreciated for the work you do. You don’t always get exposure when you don’t win a lot of games. This means a lot to me because I feel like it really does shine a good light on the community. Jacksonville’s such a great community and I’m very glad to be apart of it.”

“Calais Campbell’s impact extends far beyond the field, into communities throughout Phoenix, Jacksonville and beyond,” said NFL Commissioner Roger Goddell. “During his 12 seasons in the league, he has been a tremendous role model for the youth he serves through his CRC Foundation and is incredibly deserving of the league’s most prestigious honor.”

This was the third time in Campbell has been named his team’s Man of the Year, receiving the Arizona Cardinals’ nomination for the award in both 2011 and 2014. In 2009, Campbell formed the CRC Foundation alongside his mother Natea and has engaged in numerous charitable initiatives throughout his 12-year NFL career. The CRC Foundation, which is named for his late father, Charles, who passed away in 2003, is committed to the enhancement of the community through the teaching of critical life skills to young people.

This season, Campbell started Season of Giving, a fundraising campaign based on his on-field performance. Campbell pledged a specific dollar amount for several metrics: $1,000 for a Jaguars win, $5,00 for a sack, $2500 for half of sack, $2000 for a tackle for loss and $10,00 for a blocked kick/turnover. The CRC Foundation chose four deserving charities as part of his Season of Giving, with funds going to Feeding Northeast Florida in September, the Clara White Mission in October, the Wounded Warrior Project in November and United Way in December.

Prior to the return to his hometown when the Jaguars faced the Broncos on Sept. 29, 2019, Calais donated an additional $5,000 each to several Denver-based charities: the Beckwourth Outdoor Education, Denver Police Athletic League, Hiawatha Davis Rec Center and the Rose Andom Center.

In the spring of 2018, Campbell hosted a coding camp alongside Microsoft and the Boys & Girls Club of Northeast Florida, providing 25 kids with the chance to learn more about career opportunities in technology. In June 2019, he welcomed 250 kids at the Calais Campbell JaxPAL Youth Football and STEM Camp, combining his football acumen and interest in mentoring today’s youth through education. Campbell has also made semi-weekly visits to Northwestern Middle School as part of his CRC Book Club, fostering a reading-friendly community at an underperforming school in Downtown Jacksonville. Additionally, he makes appearances at colleges and high schools around Northeast Florida, to offer encouragement to students and have open conversations about social justice issues.