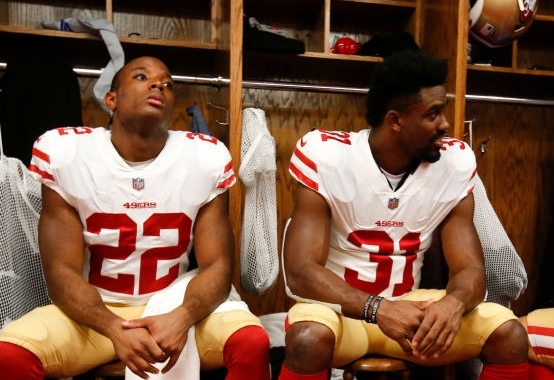 No one expected the 49ers to be in the Super Bowl this season. Sure, some thought they may make the playoffs, but nobody expected this type of dominance. The defense has been one of the best in the NFL and the offense hasn’t been too shabby either.

In this era of football where throwing the ball has seemingly become more important than running the football, the 49ers are led by their running game. Ironically, among the three running backs on the 49ers roster, there is no star. Outside of Tevin Coleman, the other two weren’t supposed to make it this far.

Going into this year, Coleman and Jerick McKinnon were thought to be the guys, but McKinnon got injured early and was lost for the year while Coleman was not in sync quite as early. That opened up the spot for Matt Breida to step into the spotlight, but that’s nothing new for Breida. The former Georgia Southern running back was not even thought of as an NFL running back coming out of college, but because of his speed, he landed in San Francisco. Despite repeated attempts to bring in running backs head of him, he continues to fight to make an impact on the roster and on the field for the team. Against the odds, he is still making an impact on the NFL level.

Not to be overlooked, Raheem Mostert was a running back with track speed at the University of Purdue, but he was relatively unknown as a Boilermaker football player. He only had 759 yards in his entire college career. Naturally, he was overlooked in the NFL draft, going undrafted.

Mostert would eventually get a shot with the Philadelphia Eagles, but he would never run the football until he reached his seventh team in the NFL, the 49ers. From there, his role would continue to grow and grow until it became what it was this year, which is a very important piece in the rotation for San Francisco. To cap off his breakout year this season, he rushed for the most yards ever in San Francisco 49ers playoff history. Not bad for a guy no one really gave a shot at the pro level. But because of his speed, he was allowed to hang around and get that opportunity.

Breida and Mostert were never supposed to be here, yet here they are as a part of the three-headed monster the 49ers have at running back. Both undrafted. Both not even an afterthought. Even with that, they never gave up on their dreams and have proved they can make it against all odds.