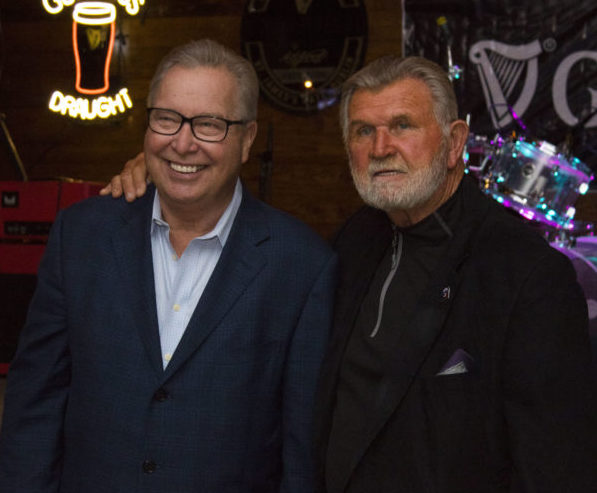 “It’s an idea that Coach Ditka and I had when we were working together at ESPN,” Jaworski said. “We would watch the games on Sunday afternoon then we would go have a cigar and talk football. We decided to do this eleven years ago and it just gets bigger and better.”

This year’s event took place at the Paramount Miami World Center with the Downtown Miami skyline and Florida palm trees as the perfect backdrop. It was a night to remember as attendees mingled over cigars from the industry’s top brands and specialty cocktails with celebrities such as Ditka, Jaworski, ESPN personality and former NFL player Mike Golic, former San Francisco 49ers wide receiver Jerry Rice, Washington Redskins coach Ron Rivera, and more.

While Cigars with the Stars is a great time, it is also a party with a purpose. The main goal is to bring together friends of Ditka & Jaws to raise awareness and funds for the Jaws Youth Playbook and Gridiron Greats charities.

Jaws Youth Playbook (JYP) focuses on a mission to improve the overall health and wellness of at-risk youth, primarily in the Greater Philadelphia Region. JYP does this by raising awareness and advocating for access to safe play, healthy choices, and supporting programs providing positive youth health and wellness platforms. JYP focuses on three Pillars of: Environment (access to play and physical play spaces), Nutrition and Advocacy.

The Gridiron Greats Assistance Fund’s mission is to assist dire need retired NFL players who were pioneers of the game and who have greatly contributed to the NFL’s status as the most popular sport in America. The services include medical assistance, transportation costs for medical evaluations and surgeries, dental assistance, housing assistance, financial assistance for utilities, medication, and coordination of services for food and other day to day necessities.

Proceeds from this great event and the silent auction supported both causes.