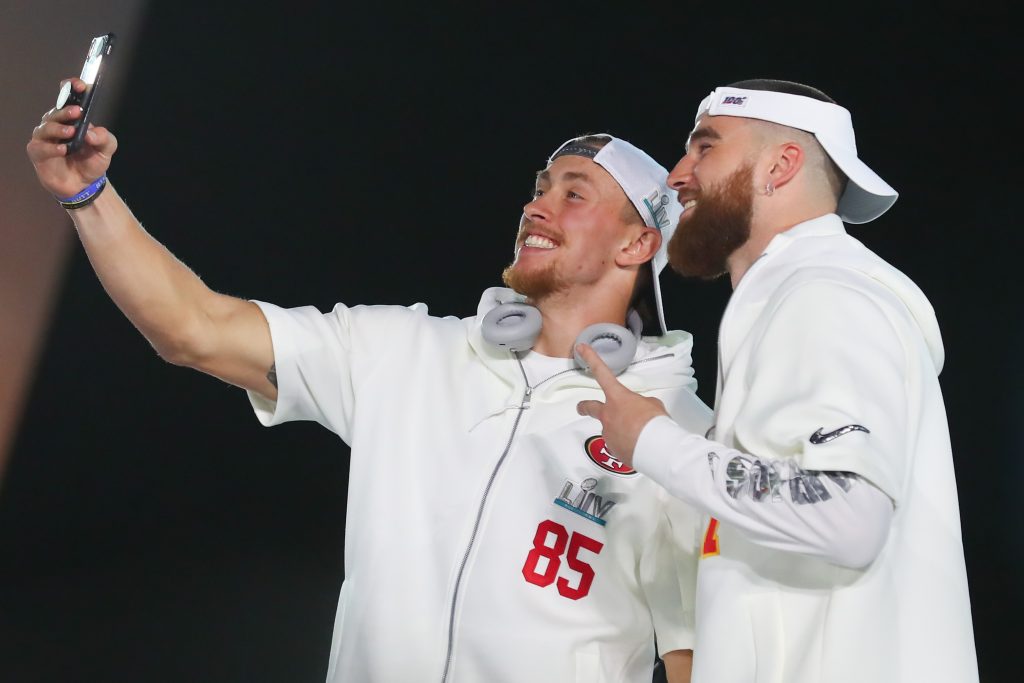 Two larger than life characters, both on and off the field. Two superstars, considered by many to be the consensus one and two tight ends in the game today. Two men in the prime of their careers, set to clash this Sunday in what is undoubtedly the biggest game of their lives. For Travis Kelce and George Kittle, each of their teams has followed an almost identical blueprint in getting to SuperBowl LIV: as they go, so go their teams.

You might recognize Kansas City Chiefs star, Travis Kelce, from his stint on the reality dating show, “Catching Kelce.” You might also be familiar with him gracing the headlines for obscene gesture fines and a 2017 arrest for drug possession. But there is no denying that most have come to associate the six-year veteran as the best tight end in the game. This season, Kelce accounted for five touchdowns, 97 receptions, and 1,229 yards. Rest assured, this elite production is not an anomaly. In 2018 he posted 10 touchdowns and 1300+ yards on 103 receptions. Additionally, in 2016 and 2017, respectively, he topped 1000 receiving yards in each of those seasons.

While Tyreek Hill and his game-changing speed garner much of the highlights each week, it is the steady and consistent production of Kelce – week in and week out – that has contributed to the team’s success. This season, Kelce posted multiple games with seven or more catches, including two games in which he reached double digits in receptions. This production is insane for a tight end.

There are a number of reasons for Kelce’s meteoric rise in receptions, one of which is playing in the pass friendly offense of head coach, Andy Reid. Additionally, the aforementioned speedster Tyreek Hill drawing the attention of the defense has opened up many holes underneath for Kelce to exploit.

Finally, because the Chiefs have so many weapons on offense, opposing defensives – specifically linebackers – are forced to attempt to contain Kelce, and Chiefs quarterback Patrick Mahomes is routinely looking for him in these situations. This was on full display in the Chiefs recent comeback win over the Texans, in which Kelce’s 10 receptions and three touchdowns were instrumental in the team’s victory. Kelce faces the vaunted 49ers defense on Sunday, which has been lights out against opposing tight ends this year.

You probably just recently starting hearing about San Francisco 49ers star, George Kittle. The third-year tight end out of the University of Iowa exploded onto the scene in 2017 with his infectious energy and love for WWE quotes. But it was his 2018 campaign that really put him on the map. In 2018, Kittle doubled his receptions from the previous season (88) while topping 1300 yards and catching five touchdowns on the year. This season for the Niners, Kittle caught 85 balls while again topping 1,000 yards and catching five touchdowns.

Perhaps the most deceiving part of George Kittle’s game is his breakaway speed. This season, Kittle had six games in which he had a reception of over 30 yards – including one that went for 61 yards. In 2018, Kittle had a reception that went for 85 yards. This speed is unheard of for a tight end. When you factor in the three-headed monster the 49ers have at running back – and multiple receiving options – Kittle is the perfect complement in this Kyle Shanahan offense. Nine times this season, Kittle had six or more catches, proving that he is a critical checkdown weapon for quarterback Jimmy Garoppolo. Kittle figures to again play a huge role on Sunday, as the Chiefs might dial up the pass rush with Frank Clark and Terrell Suggs.

When Kelce and Kittle take the field on Sunday, you very well may be witnessing the new breed of tight end in the NFL. These two teams – specifically their head coaches – have been masterful in getting them involved. The game very well may be won by whichever team gets the most out of their tight end. Remember, as they go, so go their teams.